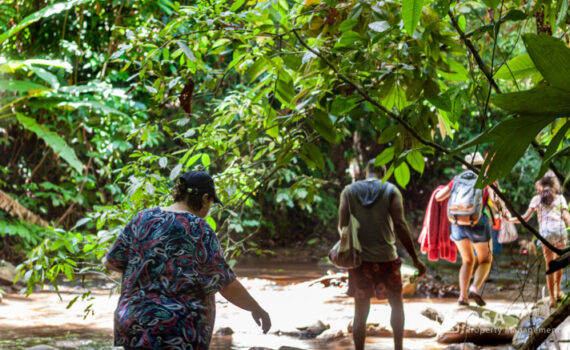 Last weekend my husband and I spent the weekend at a vacation rental house in Ojochal, that is now managed by Osa Property Management. We spent the weekend with long-time Ojochal resident Abigail (& her three kids) and another rental tenant (Derrick). After doing a majority of our work on Saturday morning, we decided it would be fun to get out of the house and do something. Abigail mentioned something about a waterfall in in the area that she used to go to as a kid, but hadn’t been there in 15+ years, so we decided that the group would go to the waterfall. Abigail couldn’t quite remember where the waterfall was, so she enlisted the help of her brother, Chuy, as he knew where it was. That’s where our Ojochal Waterfall Dreams begin…

We headed down the road from the house onto the main road of Ojochal and turned left onto a rocky dirt road right before the sign for the 2nd grocery store. Up and then down the hill, we arrived at a bridge going over a small stream and we park. hmmm??? I’m not seeing the waterfall, but okay he’s a local so he must know. Stay focused on the Ojochal Waterfall Dreams, I tell myself…

As we follow Chuy, he goes down a hill off the side of the bridge down into this stream and starts walking….what have I gotten us into?!?!

We proceed to walk about a mile in the stream, which in most places is only ankle deep; however, there were a few spots where the water gets deeper and the rocks become bigger (and more slippery).

About this point, I’m thinking to myself:
1) This better be an awesome waterfall; and,
2) I wish Abigail would have mentioned that we were going to have to walk in a stream and that we needed to wear good water shoes to get there….(more to that story later).

Along the route, I sprain my ankle in between some of the rocks—and about gave up going the rest of the way. I wish I had been one of the kids who was being carried by Chuy and by Derrick!! My husband fell at least three times (don’t tell him I was counting and it was more than me!!). Thankfully, his camera backpack is waterproof.

Chuy finally stops and all I see is this muddy pond….but guess there was this small entrance to the waterfall. Derrick, Abgail, and the kids all get into the water (my husband does for just a short period).

The kids are having an amazing time playing in the mud; and Abigail and Derrick swim through the small rock through-way to the waterfall. Chuy and I don’t get in as we didn’t have our suits on.

Eventually the kids come out to have a snack, but are sent back into the water to wash the mud off. LOL. Finally, Derrick comes back and he tells us he walked 20 min past the waterfall, but didn’t see anything else exciting.

So here is the waterfall…

Not even 5 foot tall!! We hiked through a stream and over huge slippery rocks (trust me they seemed huge!) to find that?! I asked Abigail, “This must have seemed big when you were a kid….”. She finally tells us (while laughing) that this wasn’t the waterfall she was thinking that we were going to…guess there was a miscommunication between her and her brother!! That’s good to see since we’ve had our share of miscommunication with locals as we learn Spanish LOL!!

Hence, this is why she didn’t tell us to bring proper shoes, as she didn’t remember walking in the stream, but on a path….well yeah…probably at the right waterfall. LOL!!

The lessons of this story are:
1) Be prepared for anything (i.e. water shoes, suits, and towels for any waterfall adventure; and,
2) This is the prime example of Pura Vida….we ended up at the completely wrong place, but we were with great people and if you go with the flow you’ll still have fun!

A great restaurant in the area with wonderful food

#enjoy #nature #enjoy your weekend in one of our b